This agent is living the "Attract Don't Chase" motto. Robyn has doubled her listing price point since joining Curaytor. 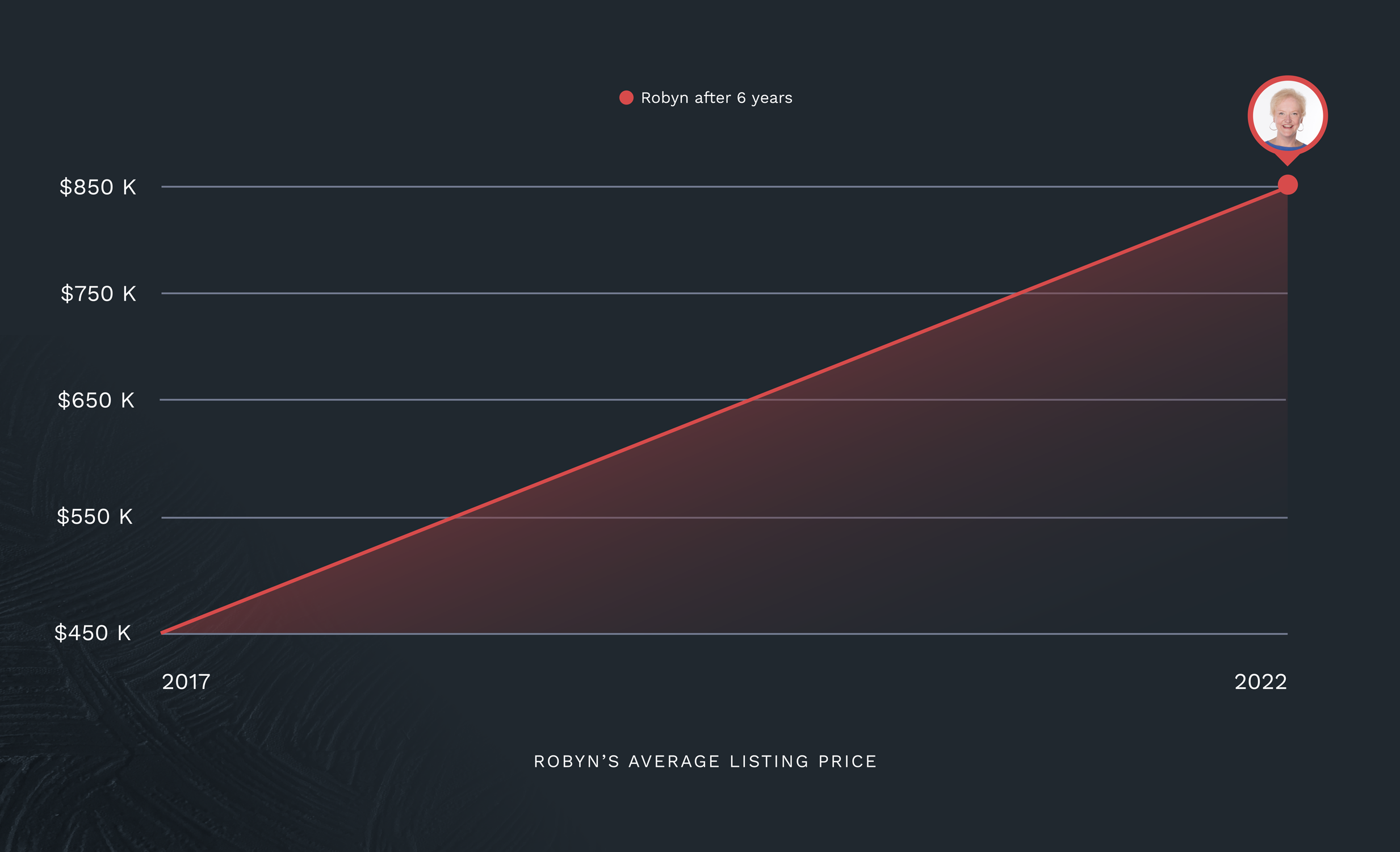 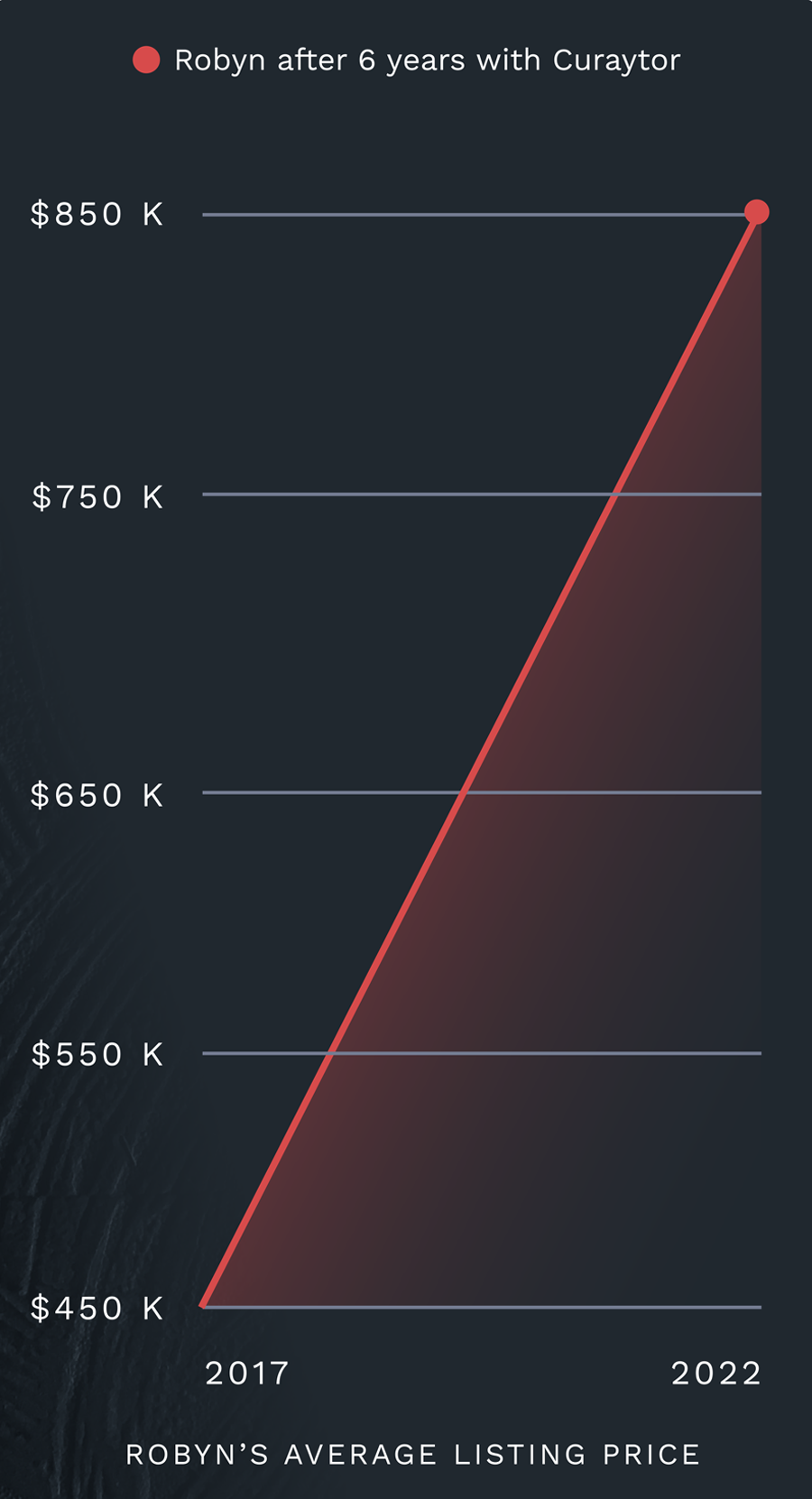 A real estate agent for over 35 years, Robyn Burdett’s superpower is her ability to listen and remember. She’s tuned in to what people want and she’s most passionate about connecting with others and helping them achieve their dreams. This drive to serve has helped Robyn establish herself as a top agent in her region.

Among her accomplishments: her team is the #1 recommended team on Zillow, she’s garnered more than 110 client reviews on both Zillow and Facebook, and since 2016, she’s been named Best Agent in both Washington Magazine and Northern Virginia Magazine.

In her more than three decades of agenting, Robyn has experimented with a wide variety of different approaches to doing business. She considers herself “cutting edge” and is often the first to try out a new gadget or system. In fact, back in 1991, she was one of the first agents to start using a digital camera, and she even had a cell phone (she says “calls back then were $5 a minute”). But in the past four years, Robyn has stopped chasing what she refers to as “the shiny pennies” and she’s only used Curaytor which has resulted in “a higher success rate and a higher price point” than she ever could’ve imagined. “The growth with Curaytor has been exponential. But it’s also the detail… the care… and the connection with other members” that has totally changed everything for her.

“What I love about Curaytor,” Robyn says, “is that they’ve added the human element back into it… you nurture us. It’s a people business and you have humanized it.”

The marketing that makes a difference

Robyn’s particularly impressed with CEO Jimmy Mackin. “I don’t think any other company has a CEO that [communicates] daily with e-mails, texts, marketing plans, and ideas…” She also appreciates Chime which she calls “easy and sleek and very nice to use.”

For her, the marketing that is done by Curaytor has contributed hugely to her recent success. “I’m the best realtor and I’m good at it because I’ve been around for so long, but I admit I’m not the best at marketing,” Robyn explains. “But Curaytor is. So I hired them to handle all the social media, the coming soons, and all the posts so they make sure its generated on all the sites and looks snazzy, looks gorgeous… and with that, I’m getting my success rate on listings… my success rate is higher and—most importantly—my price point is higher.”

How Curaytor helped accomplish her goals

Robyn’s initial goal when she first signed on with Curaytor was to increase her price point. “Most of what I did prior to [working with Curaytor] was through Zillow so my price point was lower. In 2016, my price point was $450,000. Now my average listing price is $850,000 and my average purchase price is $640,000. It’s gone up dramatically because I’m using the resources available to generate more social media and Google leads rather than just Zillow leads.”

In fact, this year she’s had three transactions in the over-$1.3 million price tier—an exceptionally high price point in a region where the median sale price is $419,400.

This year she’s been noticing how more and more new clients are finding her organically because Curaytor has helped her attract leads rather than chase them. Four transactions came due to Google My Business, one of those being a buyer who purchased a $1.1 million home. “They’re calling me,” Robyn says. “It’s much better than cold-calling Zillow leads.”

“Don’t stop your marketing,” Robyn says. “Because if you do, you’ll be working at Macy’s.”

After over a third of a century in the real estate industry, Robyn has her share of experience with changes—foreclosures in 1991, short sales, recessions, downturns, bubbles and crashes—and she’s noticed one thing in common amongst the companies that end up closing down: “they all cancel their marketing.”

Her advice is to treat change as an opportunity rather than a threat. Additionally, she questions the approach some agents are taking by being “in preservation mode, on the sidelines.” What’s important is to keep on making connections. Continue growing your business.

Robyn also adds that she believes its “mind boggling to encounter agents who don’t actually talk to people—who only do their communicating via e-mail and text.” Since her early days of being a fundraiser for the Arthritis Foundation, Robyn has delighted in the conversations she has with people. It’s part of the reason why she’s now become a certified Exactly What to Say guide. She stresses that agents must understand how critical relationships are, and a part of that is “looking at the conversations you’re having.”

Again and again, clients remark that Robyn “actually cares what [they] think.” And building that type of rapport is about honesty. Something Robyn recommends is getting permission from buyers to tell them if a particular home “is not a good opportunity for them.” Often, when home shoppers are looking at properties, they get so focused and excited that they may charge forward with exciting real estate that they may regret later. Robyn believes in establishing a foundation of trust, and sometimes that means warning a client that a particular property they are currently thrilled about may disappoint them later.

This sort of honesty is why Robyn has garnered so many positive reviews from the over 1,200 homeowners she’s assisted with buying and selling. The testimonials speak for themselves. “Who you work with really matters and we are so happy that we worked with Robyn!” declares one keen homeowner. Another says, “Experienced and honest, she’s so knowledgeable about every aspect of buying and selling real estate. She’s always watching your back and really hones in on your specific tastes and needs. She’ll make sure you end up in the perfect house.”

The community is what Robyn values most in her Curaytor partnership. “Everyone here shares… Everyone sends feedback and people are constantly giving solid advice. It’s the learning and giving.”