A year ago, real estate agent Brian Curtis thought holding regular sales meetings for his team was, as he put it, “absolutely crazy.”

Instituting them last May at the behest of his business coach blew that original assessment out of the water.

Curtis said his 10-agent team -- Bentonville, Arkansas-based Curtis Realty Group -- has raised its lead-conversion rate by 2 percentage points, has become more productive and operates as a tighter unit thanks to its sales meetings.

“There are too many team owners and not enough team leaders,” said Brian Curtis.

If you doubt the effectiveness of coaching your team up on a regular basis -- or know your meetings are subpar -- the testimonials below provide food for thought.

If your sales meetings suck, do this

Many business departments don’t need regular coaching or meetings. Your sales group is definitely not one of them, Smith said.

Successful sales depend on a winning mindset and constant effort, he added. These require consistent reinforcement and encouragement from sales managers, and sales meetings provide the arena for them to cultivate these skills.

But everyone knows meetings aren’t always effective. Managers must be organized and keep their team’s needs front of mind.

“If they don’t have faith that sitting with a manager is going to help make them more money, they’re not going to go (or truly pay attention when they do),” Smith said. Simple as that.

Every Friday, Smith leads the Curaytor sales team through a one-hour meeting.

Mitchell said he appreciates knowing he’ll have regular feedback on his performance: if his strategy needs improvement, Smith suggests tweaks. This gives him extra confidence, he said.

In addition to helping him stay focused on the sales strategies he knows work, the group environment provides useful insights from the experiences (and strengths and weaknesses) he and his colleagues can share, he added.

The meetings also motivate him. If he’s had a good week, Smith provides positive feedback in front of the group, a strong incentive for him. But if sales are down, Smith also finds it to be a powerful motivator to hold reps accountable in front of each other, not just behind closed doors.

“We feed off each other,” Curtis said of the team dynamic generated through the meetings. He gave an example: a team member recently shared that he made 117 calls the previous day, which raised the team’s competitive juices, inspiring everyone to work smarter and harder.

Curtis holds the daily meeting at a sandman-early 7:30 a.m. It has three purposes:

Eight months ago, Curtis added in one-hour weekly meetings to focus more on training. Given the industry’s low barrier to entry, he said, the weekly meetings allow him to offer quality, consistent sales coaching.

In addition to the daily and weekly meetings, Curtis also takes his team and their significant others on an evening outing once a month to forge bonds on an informal level. They’ve gone bowling, done an escape room and enjoyed a pizza dinner. The roughly $300 is well worth the camaraderie it engenders, Curtis said.

Curtis has embraced his coaching role. “There are too many team owners and not enough team leaders,” Curtis said.

Since instituting weekly sales meetings six months ago, the team has become much more thorough and consistent. Conversion rate, accountability, focus and tighter adherence to the brand guidelines have all shot up, Raanes said.

The meetings have also improved culture. “From a unity standpoint they’ve been dynamite,” Raanes said. 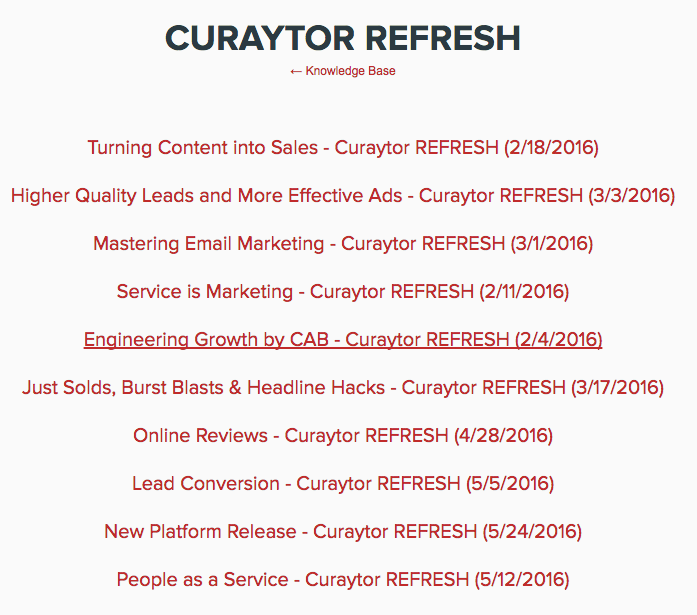 Curaytor hosts a one-hour Refresh webinar each week designed to help its clients optimize their businesses.

Raanes strongly encourages attendance at the meetings, excusing agents only if they’re on vacation. (However, his agents aren’t W-2 employees, so, of course, they have the option of declining the meetings, but Raanes said enthusiasm remains high for them).

Rockstar’s morning “huddle,” as Raanes calls it, starts daily at 8 a.m. and runs for approximately 10 minutes. It follows a “2-2-2” format: two minutes to share two things they did great yesterday and two things they’re going to focus on that day.

“From a unity standpoint (our meetings) have been dynamite,” said Rick Raanes.

Raanes also leads a Thursday “happy hour," where he orders pizza and he and the team’s two buyer’s agents refine their systems and call clients.

Why did you hire Curaytor? I really love what Chris and Jimmy are putting together. I was putting so much time into a WordPress site and it looked nice. However, I was not getting the leads that I wanted or doing the proper follow up. I also wanted to grow our team, and this was a great way to create a higher level of accountability. I love the clean lines of the site. It is very simple.

What has it done for your business? I don't have to spend the time playing with the WordPress site. I can also get back to doing what I do best: networking in the community.

What is your favorite feature of the system? My two buyers agents love Curaytor’s customer relationship management platform Follow Up Boss.

What is it allowing you to focus on now? I can focus on getting leads for my team, knowing that we have two great agents who can convert them. It has been such a great addition to what we are doing.

Would your team benefit from sales coaching?

Schedule a Meeting with Curaytor