You can't get the right answer if you ask the wrong question.

The most annoying thing that I'm asked about when it comes to internet leads is “What's the conversion rate?” I get asked so frequently that I wanted to address it head-on, once and for all.

It is a stupid question. Here’s why...

The number of variables that go into what your lead conversion rate will be is nearly infinite. Let me give you a few that will impact it:

Are you following up with every lead?

How quickly are you following up with new leads?

How many times do you attempt to contact the leads?

Are you using the right scripts when you talk to the leads?

Do you have the right people calling the leads?

How long do you follow up with the leads?

What do you send the leads to nurture them?

The keyword word in all of those questions is you.

Another reason it's nearly impossible to figure out the conversion rate of real estate leads is because most of the popular CRMs require you to manually mark leads as closed. When you go into your MLS to change the status of a listing to sold your CRM doesn’t change the contact to closed. Plus, after you finish a transaction with someone they should be moved in the CRM from closed to past client.

This is why nearly every agent I know has a hot mess of stages, sources and tags in their database. It's garbage in garbage out.

Unless you have 100% adoption of manually making those CRM stage changes for every buyer and seller lead, your conversion rate is not being accurately calculated.

The good news is those who are following up properly and do track everything perfectly are typically winning and winning big. And best of all they know it. If you have the right people and processes in place and you analyze and crunch all of the numbers, you're going to uncover the two metrics that actually matter:

What is the ROI of a lead source?

What is your cost to acquire a new customer?

I'll give you a real-world example of why. I work with an agent in Marietta, GA named Kelly Allen. She's a great agent and a longtime client. She sent over some data the other day and the thing that jumped off the spreadsheet is actually what inspired me to cover this topic.

She generated 1,508 leads and closed 11. If you were to look at the spreadsheet she created and focus on the lead conversion rate column you might be very tempted to cancel that lead source.

That is precisely why focusing on conversion rate is foolish.

The reality is, just like with conversion rate, cost per lead is also insignificant. Just make sure your cost to acquire a customer is less than what you make from a transaction.

If I pitched you that your conversion rate from buying Curaytor leads was going to be .73% you would probably look elsewhere. On the flip side, if I said for every $654 you spend you will have a new customer and for every 1,508 leads you generate you will pick up 11 additional closings you would be all in. If I told you that your return on investment is going to be nearly 1,000% you would whip out your credit card and sign up.

I'm not even factoring in the lifetime value of a customer into ROI. Inevitably, some of those 11 people in the future will send more business Kelly's way. She is great at what she does.

The truth is every client I work with who is getting a big ROI tracks it religiously. The clients who don't feel like they're getting an ROI aren't tracking or following up properly. The difference is them not us.

So sure, lead providers have an obligation to send you leads that are going to close. But in reality the things that actually determine if that happens are the systems, processes and people you have in place.

Be honest with yourself. Is the reason you aren’t getting an ROI because the leads all suck or could it be possible you aren’t willing to follow-up with 1,508 leads to find 11 deals?

It is actually very simple to figure out what you, specifically, need to focus on. Just answer these five questions:

Having the right expectation about how much better your conversion rate could be is also critical. If Kelly’s conversion rate is .73% and she can get that up to .98%, it doesn't sound that great. But if she can, that .25% improvement would have been an additional $23,000.

Are you telling me that my client Joe Herrera can close 200 deals per year from Facebook and track that he is and know that he is, and you can't even close 1?

The other thing nobody talks about is the decay that happens after the lead has been “converted” into a qualified appointment. What savvy agents like Dan Chin also track is their appointment scheduled to show rate. They track appointment showed to contract signed percentage. And they track their contract signed to deal closed ratio.

They're checking all of those boxes so they will know where the leaks in the bucket are and what to focus their coaching on.

I’ve seen Dan's spreadsheets. He teaches this stuff to other teams. But him sharing how he does it and me writing about it won't help. You executing is the only solution.

People who don't track don't know what's working. Because they don't know if it's working they assume it's not. That is a massive mistake.

It is impossible to know the ROI of your brand.

But you should keep building it.

It is impossible to know the ROI of a video view.

But you should keep recording them.

It is impossible to know the ROI of a social media follower.

But you should keep adding them.

It is impossible to know the ROI of sending a mass email.

But you should keep sending them.

It is impossible to know the ROI of 30,000 people seeing your ads.

But you should keep running them.

It is impossible to know the ROI of your mom. (h/t @garyvee)

But you should keep listening to her.

With those things, you have to trust your gut.

With the ROI of leads, you don’t.

Just stop asking what the conversion rate will be. It’s a stupid question. 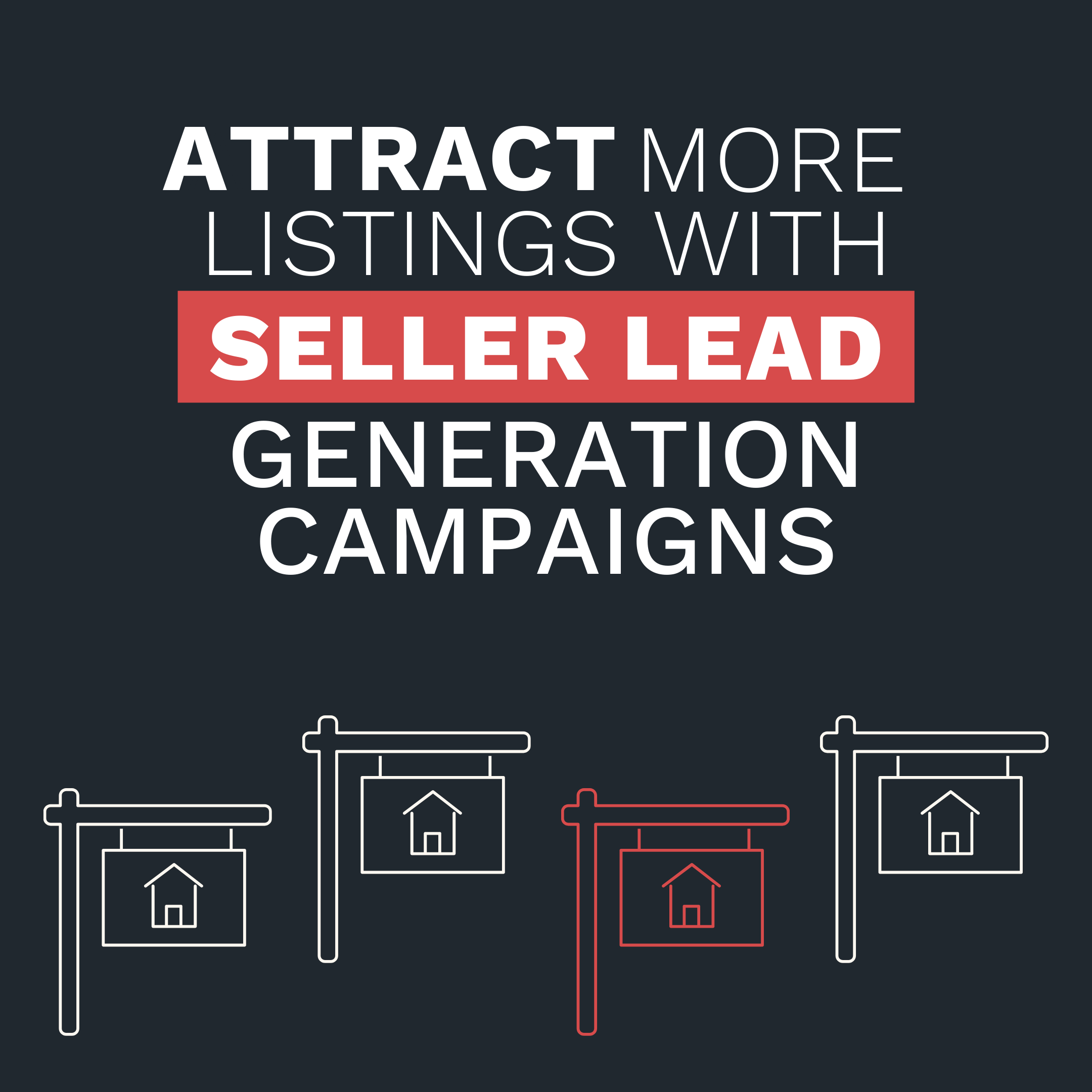 Big companies like Zillow, Offerpad, Redfin, Opendoor, spend thousands of dollars on ad campaigns that bring in sellers, let’s learn from them. 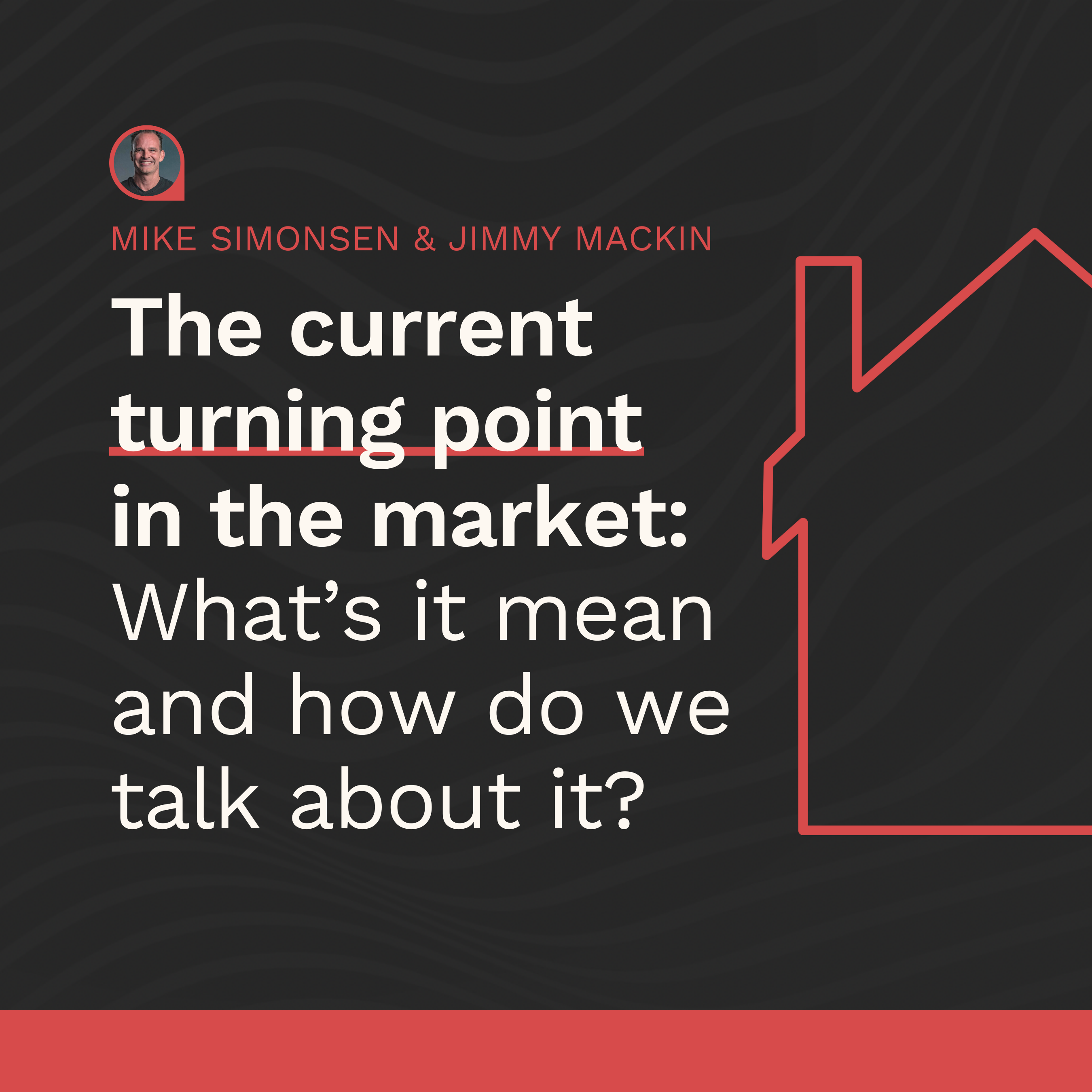 Mike Simonsen and Jimmy Mackin: The current turning point in the market. What’s it mean and how do we talk about it?

Consumers depend on their agent to help them make the best choices. This means an agent has a duty to be more informed, more connected, and more aware of the data points that really matter.