What happened when a great salesperson called 5,000 "bad" leads?

She didn't believe them and in October 2013, she decided to test their assertion by hiring a top-notch inside sales associate (ISA) to comb through the list.

You can watch Sarita explain the entire experiment in a video at the bottom of this post.

Dua asked the ISA, Mac Bell, to reach out to every lead on the list he could, paying him a dollar per contact for a total of $5,000. Dua agreed to pay Bell the $5,000 regardless of the outcome. It would take him three months.

Bell began his dissection on October 2nd. By the 18th, he had paid for himself more than two times over, confirming for Dua, her agents and, now, any doubting agents: old leads aren't lifeless.

On Oct. 18, a buyer Bell dug up from the list closed on a $400,000 home. Dua pocketed $12,000 from the sale, securing a profit on her ISA investment just days into the experiment. That doesn't include the profits that would bloom later from Bell's work.

That conclusion was indisputable before the first payday.

Bell made four appointments for Dua's team on his first day. The second day he made another four, and on the third day, five.

As online lead from platforms such as Zillow Group, realtor.com and Facebook begin to play a bigger role in real estate, skilled ISAs and smart strategies built to mine gold from a database of older leads -- like Dua's -- will be increasingly important, if not vital.

"If the leads are bad, we'll stop the experiment," Dua told herself when she launched the test.

She began bringing in a high volume of online leads from platforms such as TigerLead after forming her real estate team in 2010, when she joined Keller Williams Realty.

By 2013, her buyer's agents were claiming the older leads in her database didn't want to talk. "They were looking for houses, not agents," Dua said they told her.

However, with a decade and half in sales and marketing roles at tech firms (including seven years at computer hardware giant Intel) she's wired for making decisions based on evidence.

She felt a talented inside sales professional, who operated from a customer service approach, would get results. She had worked with Bell at one of her previous tech companies and knew he was good. 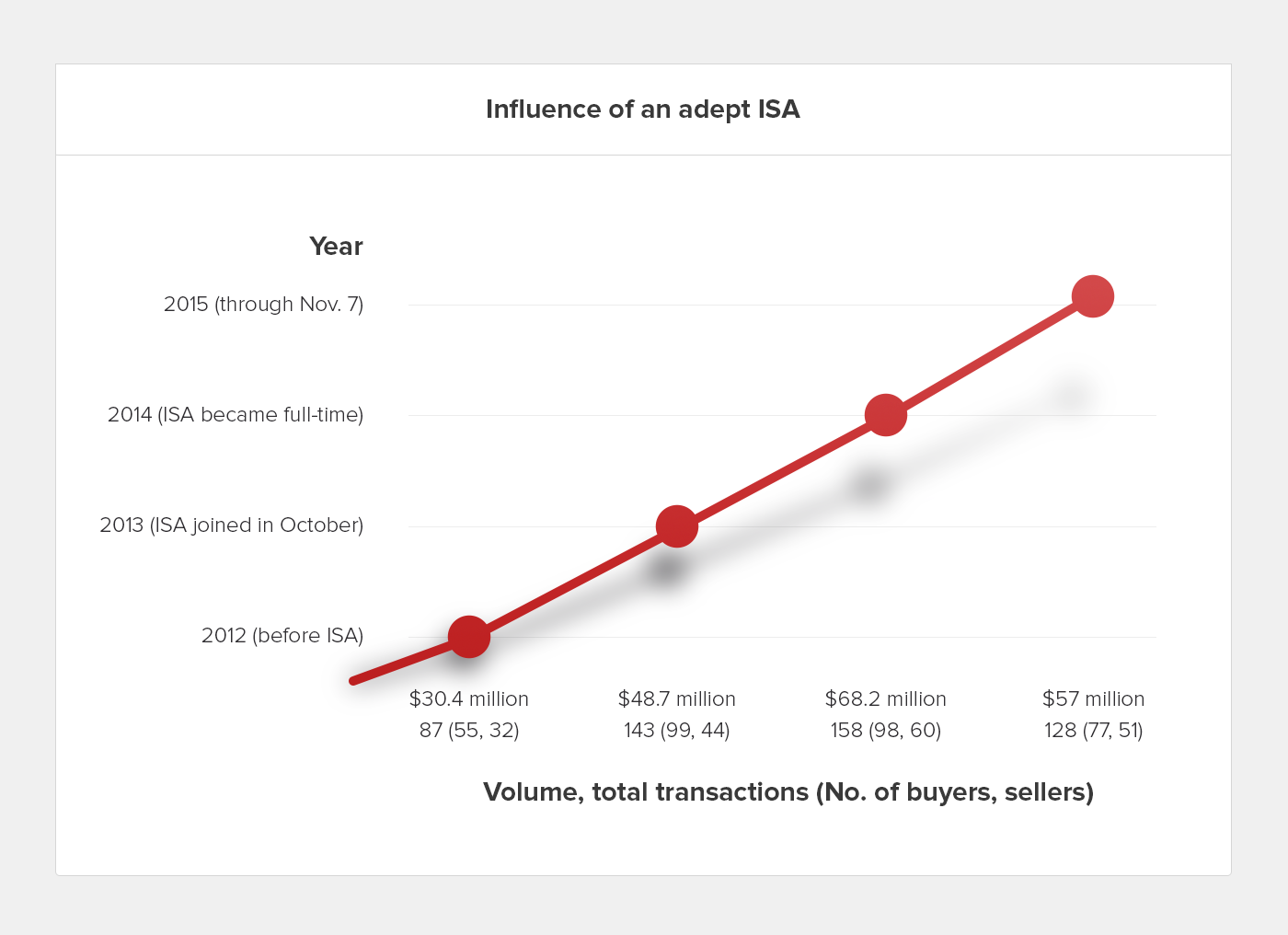 In addition to upping her team's transaction count, Dua said Bell -- along with the implementation of Curaytor's all-in-one marketing system -- was the fuel behind the "Ask Sarita" team's increase in seller clients and jump in the average price point of homes it helps sell from $338,000 in 2013 to $447,000 this year.

Her jump in production would be even more dramatic if she hadn't focused so much on other arenas of life.

Upon completion of the initial test in early 2014, Dua made Bell her ISA chief, paying him close to $60,000 each year for his point position on incoming leads. He is now licensed as a real estate agent, which allows him to better scrub the contacts he speaks with.

Lessons from an ISA master

Coming from tech, Bell didn't have any real estate baggage when he first jumped into the trenches with Dua. He turned fresh eyes on the massive lead-scrubbing challenge.

After a career of selling software to other businesses, Bell said it was refreshing to speak to consumers when he started with Dua.

Most weekdays he makes between 60 and 80 calls on behalf of the Ask Sarita team, with a goal of scheduling appointments with at least five leads each day.

Bell has a process

The first contacts he reaches out to each day are those that have come in the night before. Second, he turns his attention to the "pipeline," which consists of warm database leads (Bell estimates that a quarter of the nearly 700 contacts in that bucket are planning to transact in the next year).

Then, he begins the day's third wave of calls: leads from the database that he hasn't spoken with yet.

Bell said his job is made easier by his confidence in what he's selling. "She's a great piece of software," Bell said of Dua.

#WaterCooler: How Our ISA's Booked 18 Appointments in 1 Week

Death of a Sales Force by Chris Smith

Salespeople and the CRMs they use are going away. They will die a swift death, and due to self-inflicted wounds.

The Worst Moment in Sales

We’ve all been there. We get to the end of a great call with a great lead and then they say ‘no’ - They don’t want to go forward...