Hawaii real estate agent Tyler Hinderer’s wife had a bright idea in mid-July, one that hadn’t yet fully blinked on in his brain.

Thanks to Facebook Insights, the solo agent on Hawaii’s Oahu island had noticed that approximately 65 percent of his Facebook Business Page’s fans were women. He went to his Follow Up Boss database and saw the same trend. This surprised him a bit.

He told his wife. She suggested he tailor his Facebook ads to women by switching out his typical red highlight color for pink. 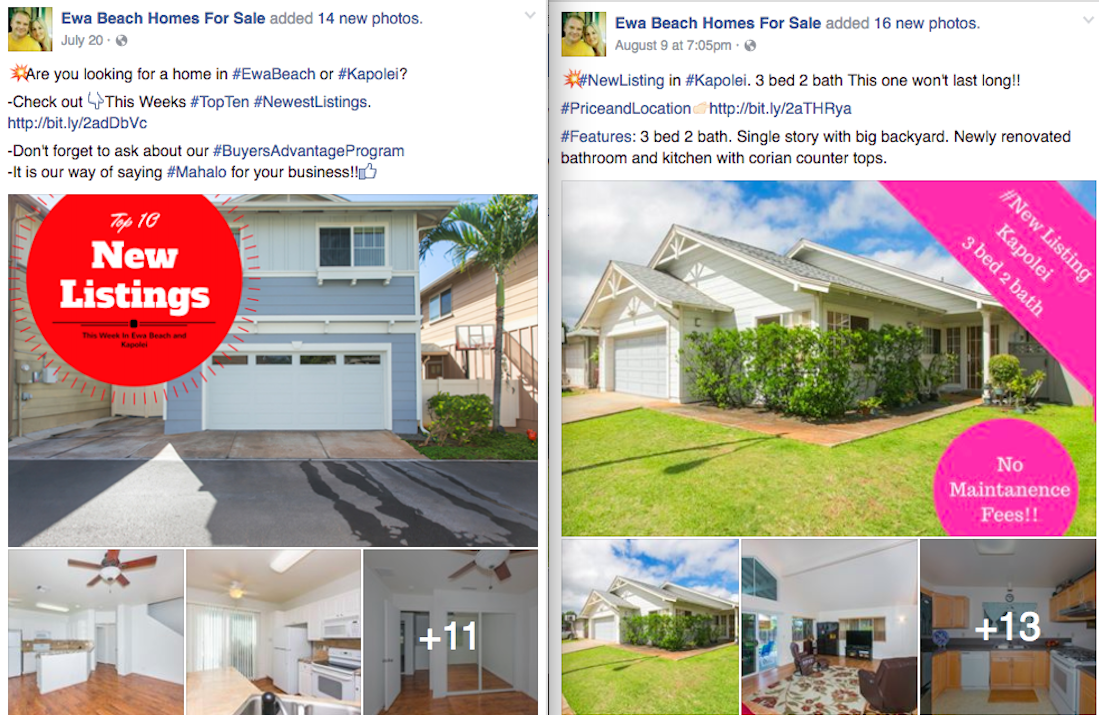 By simply changing his Facebook ad’s highlight color from red to pink, and keeping all other variables the same (ad spend, duration, formatting), engagement on the new ad blew the previous ad’s engagement out of the water.

On the same Just Listed-formatted Facebook ad, with the exact formatting and ad spend, the new ad received nearly double the post clicks, had more than double the link clicks and comments went from 1 to 43, shares from 3 to 14, and leads from 25 to 50!

The light, which had been flickering for months, fully clicked on. And the results are flowing.

Real estate agents everywhere have the same immense opportunity at their fingertips. It sounds so simple -- tailoring message and branding to your audience, but many agents may be overlooking this straightforward messaging truth.

And the time is ripe, because the tools for audience analysis have never been better.

Facebook Insights breaks down the demographics (in the “People” tab) -- gender, age, location -- of who likes your page, who you’ve reached, and who you’ve engaged. Facebook Insights provides the same stats for those who responded to specific ads, allowing you to fine-tune messaging even further.

Smart CRMs like the one baked into Curaytor, Follow Up Boss, allow agents to similarly slice and dice their database to glean insights that can help them create messaging that resonates and, more importantly, increases lead-gen and the all-important conversion rates.

Reach out to Curaytor for a demo of how the firm’s tech and coaching platform can help you effectively analyze and create messaging that resonates with your audience.

A messaging future focused on audience

With the messaging-audience light fully on, Hinderer is set to shine it in more directions.

As he works on Oahu, which has a big military presence, Hinderer is planning to run Facebook ads targeted to a smaller subset of military members, with camo coloring instead of the red and pink he’s already done.

Before that, however, he’s exploring another opportunity.

Hinderer has noticed that Filipinos and those of other non-white ethnicities make up a significant portion of his Facebook page followers. As some of these communities aren’t targeted as much by agents, he’s decided to apply his new-found strategy to these communities.

Facebook Insights doesn’t break down followers by ethnicity, but Hinderer reviews everyone who liked his page at the end of every day. Their profile photos and names provided this insight.

In late August he’s running his first ad toward a Filipino neighborhood in his community. It will be translated into Ilocano, a prominent Filipino language group. To better engage the leads that come in, he’s brought on a buyer’s agent fluent in Ilocano.

If it goes well, he’s hoping the relationship becomes more formal and she becomes the first member of his real estate team.

Editor’s note: Before hiring Curaytor in March, Tyler Hinderer had watched the popular real estate marketing and tech web show #WaterCooler, hosted by the firm’s co-founders Chris Smith and Jimmy Mackin, for two years. He finally pulled the trigger to turbocharge his lead-generation. In his words: “They’re always looking ahead, into the future. That gives me confidence I’ll always be on the cutting edge. They’re always a little bit ahead of the curve of everybody else.”

What has Curaytor done for your business?

It’s forced me to become an overall better agent, not just one-dimensional. It’s made me focus on becoming an expert in my market, to up my game around marketing and advertising.

Its systems, tech and coaching has also supercharged my contact database, which has nearly doubled since I joined in March to about 1,440 contacts.

I consistently pull in 35 to 50 new leads each week with Curaytor’s system.

1. I love its website; it’s flexible and looks great.

2. The private Facebook Group for Curaytor clients, Curaytor Mastermind, is gold. It’s worth as much as any of it. You get to see what Curaytor clients are doing in other markets, what’s working and what’s not. Lightbulbs go off constantly.

Now I have the system and strategy in place to accelerate growth, pour as many leads as I can handle into my database.

I’m now doubling down on the science of conversion, looking at what works and focusing on underserved neighborhoods to generate business.